Pulleys: Did You Know?

The evolution of pulleys is fascinating. These mechanisms we take for granted in everyday life actually have their roots in civilizations dating back 5500 years. Since then, the number of improvements and uses have increased to a staggering level, forever revolutionizing societies across the globe.

History of the Pulley

The first written record of pulleys dates to the Sumerians of Mesopotamia in 1500 BCE, where ancient peoples were using ropes and pulleys for hoisting. To understand why pulleys were important to this civilization, it is important to know something about the geography and culture of the area.

Mesopotamia means “between 2 rivers.” In this case, the rivers are the Tigress and the Euphrates. The area encompasses southeastern Turkey, parts of Syria, and most of Iran. It was divided into 2 parts—the mostly flat Upper Mesopotamia and the fertile plain of Lower Mesopotamia (known later as the Fertile Crescent). Inhabited as early as 9000 BCE by tribes of hunters and gatherers, Mesopotamia gave rise to small village settlements.

The invention of better tools for irrigation and farming, along with the domestication of animals gave birth to a flourishing population. Once settlers discovered how to store grains, civilization grew and houses were built. Inventions like pottery, stone tools, and looms for spinning thread from wool and flax were used in Sumer as early as 3000 BCE. Experts posit that permanent settlements needing drinking water for inhabitants and water for irrigation propelled the invention and use of the pulley.

Interestingly, recent archeological finds suggest that ancient Egyptians used a pulley to lift the 2.3 million, 5,000 pound stone blocks for the Great Pyramid. Many Egyptologists believe that Old Kingdom (2649-2150 BCE) workers used a simple pulley of hardwood, limestone, granite, and possibly copper in a cylinder and cradle configuration to lift the great blocks.

The portion of the cylinder in contact with the rope had a groove to prevent the rope from slipping. Flax oil and/or rendered animal fat provided lubrication. Recently, an engineer fabricated this device from limestone. In testing the device on a 52-degree incline (thought to be used for ramps in the construction of the Great Pyramids), he discovered that six or more of these pulleys in simultaneous use could have lifted a block every five minutes (which would have been the required lift rate to complete the Pyramid in the time experts believe it took).

Historians, however, credit Greek mathematician, inventor, astronomer, engineer and physicist, Archimedes, with the first documented compound pulley system in the third century BCE. He used a system of compound pulleys to move a three-mated merchant vessel with 600 passengers aboard to dry land, according to a written work by Greek biographer and essayist, Plutarch.

Essentially, Archimedes improved on the invention of the single pulley by proving his theory that a pulley operates much like a lever. Both devices reduce the amount of effort the operator needs to exert to move an object. Showing that several pulley wheels dispersed the weight more than a single pulley, he proved the formula mechanical advantage (MA). MA is the number of rope sections that determines how much easier it is to lift or haul the object.

FA is the hauling force and FB is the load.

Archimedes’ invention of “the claw” had a profound use in warfare. This device consisted of huge beams that swung out. One version dropped weights to punch holes through invading ships to sink them. Another made use of a claw to raise, shake or capsize a ship. This invention figured prominently in the Siege of Syracuse by the Romans in 215 BCE. Other early applications of pulleys in ancient warfare were crossbows and catapults among others.

Pulleys also figured into many of Leonardo da Vinci’s inventions, including the robotic knight that he designed for Ludovico Sforza, a wealthy patron and fan of da Vinci’s. Though the robot did not survive to the present day, it appears that the device was capable of walking, sitting, and jaw movement through a system of pulleys and gears. (In 2002, mechanical engineer, Mark Rosheim, used da Vinci’s notes to build a working model of the robotic knight. He also incorporated some of the concepts in the design of planetary exploration robots for NASA.)

Through the years, pulleys found their way to the dark side of history. Warfare and torture devices became all the more gruesome with the mechanisms involved. One such device is the strappado, mostly used to extract information from alleged heretics and witches. This device consisted of a pulley over a rope that passed over a beam or hook on the roof and was tied to the hands of the victim. Additional weight could be added to the feet.

The strappado dislocated joints and limbs causing long-term damage to nerves and muscles, and permanent paralysis and loss of sensation in the arms. Another torture device was the upright jerker. A cord was wrapped around the neck of the condemned who was positioned on a platform. Rather than dropping through a trap door, a system of weights and pulleys would jerk the victim into the air violently. The purpose of the device was to break a person’s neck swiftly. 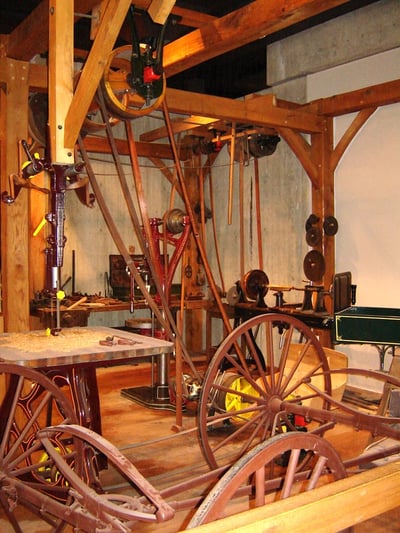 Today, pulleys have a variety of configurations. A class 1, or fixed pulley, is stationary. It redirects the force in the rope or cable. A single anchored pulley has the mechanical advantage of one. In contrast, a class 2, or movable pulley, has a free axel with a mechanical advantage of two, meaning if one end of the rope is anchored, an operator pulling on the other end of the rope will have double the lift force on the object attached to it. A compound pulley combines fixed and moveable components. Block and tackle pulleys use a single continuous rope to disperse tension force around one or more pulleys to lift or move an object. 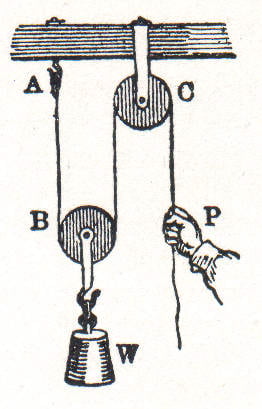 It is interesting to consider how pulleys have transformed everyday life. For example, there are 900,000 elevators in the U.S. alone. That is one elevator for every 344 people. The average ride on an elevator is 40 feet (4-5 floors), and the average number of elevator trips by U.S. riders is four per day, totaling about 18 billion trips per year. In terms of distance traveled, that translates to 136 million miles per year or about 285 rounds to the moon!

Without pulley-enabled elevators, high-rise buildings would be impractical, of course. And, without pulleys, the construction of multi-story buildings would be impractical as well. Mobile cranes with telescopic booms have become essential in the construction industry, as have tower cranes for extremely tall structures, with the strongest hydraulic tower cranes able to lift 70 tons. Other uses of pulleys in everyday life include garage door openers, fitness equipment, curtains and blinds, extension ladders, flagpoles, and safety harnesses.

For millennia, we have harnessed the power of pulleys. From the earliest basic use for lifting water from wells for drinking, people quickly realized the potential for larger-scale uses such as moving 5,000-pound granite blocks. The use of pulleys in both small and large scales continues today. Without a doubt, pulleys have been an incredibly significant catalyst for progress.