Indisputably, “connectivity” to a host of applications and devices offers potential to improve people’s lives. We can do amazing things, like view the inside of our refrigerators from the supermarket, remotely control flying drones to deliver packages, see and speak to people on the other side of the world (in real time and on our cells phones, none-the-less), and retrieve vast amounts of information in seconds.

People everywhere have embraced these capabilities. In fact, there are 17 billion Internet-connected devices globally, and McKinsey expects that number to reach 1 trillion by 2025 – a 59-fold increase! While some experts may disagree with this figure, the number of Internet-connected devices in use is rising dramatically. Along with faster technological innovation has come faster user adoption, too. Consider the accelerating pace of technology adoption through the years: the AM/FM radio had 50 million users 38 years after its invention, TV 12 years, the Internet 3 years, and Twitter 9 months. 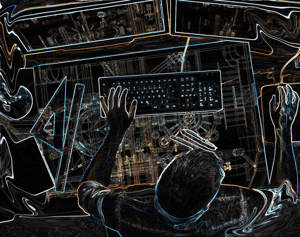 Yet, there are downsides to increased connectivity that are becoming more evident and more frequent as the types of devices and applications in use increase. Among these are nomophobia and digiphrenia. This article will focus on measures engineers can take to prevent these, and digital distractions in general, so that the downsides of habitual connectivity don’t overtake the improvements to workplace efficiency and effectiveness technology was intended to yield.

What are Nomophobia and Digiphrenia?

Digiphrenia refers to persistent digital distractions that tend to take focus off what is immediately before us, thereby reducing the quality of our encounters such as when friends are absorbed with texting at dinner, or a person is texting while driving. Digi refers to “digital,” and phrenia to a “disordered condition of mental activity.” Digiphrenia puts pressure on people to be connected and engaged constantly, resulting in anxiety, sleep deprivation, decreased productivity and performance at work, and lack of focus from constant distraction.

Nomophobia is a condition resulting from an irrational fear of being without a cell phone.  A government study found that 53% of mobile users felt anxious when they were unable to use their mobile phones, and over half of users never shut them off. Another study found that three of five cell phone users in the U.S. cannot go 60 minutes without using their cell phones.

This addiction is real. Several reports have documented user back problems from hunching over a phone, neuralgia, anxiety, depression, disrupted sleep, diminished attention span, cramped fingers, wrist pain, and retinal damage, among others.

What is the Impact of Digital Distractions on Productivity?

In addition to the health effects of digiphrenia and nomophobia, there is compelling evidence that digital distractions are impacting workplace productivity significantly. Studies have shown that smartphone-users touch their device somewhere between twice a minute to once every seven minutes. They also find that conducting tasks while receiving e-mails and phone calls reduces a worker’s IQ by about ten points, relative to working in uninterrupted quiet. That is equivalent to losing a night’s sleep, and twice as debilitating as using marijuana. Constant interruptions accustom workers to distraction and train them, in essence, to seek diversions.

According to a survey of hundreds of workers by RescueTime, 98% of workers say they are interrupted at least a few times every day. Nearly 52% reported frequent daily interruptions. In the U.S. alone, interruptions result in 2 billion wasted work hours each year and cost the economy $1 trillion dollars in lost productivity. While approximately half of the interruptions study participants encountered were “in person,” a significant percentage were digital distractions.

Another survey from a staffing firm found that the average employee spends 56 minutes a day, or nearly 5 hours per week, on their cell phones for non-work related things. Personal email, mobile gaming and online shopping are the most frequent time-wasters. When sorted by age group, the same survey found employees from 18 to 34 waste even more time – over 8 hours per week.

How Can We Manage Digital Distractions?

If you are using technology as a temporary distraction from a task that you dislike, or an escape from “an uncomfortable reality,” think about what role the distractions are playing in your workplace performance/productivity. In more extreme cases where distractions become coping mechanisms for some “bad” experience or permanent situation, no amount of distraction will “heal” it. The solution is to learn new strategies to cope or fix what is broken.

In addition, it is important to understand what a distraction is. Distraction is a process that results from a stimulus or alternative task that draws a person’s attention away from the primary task of interest. Simply put, a distraction pulls us away from what we want or need. When a distraction becomes a habit, we lose the ability to maintain the requisite focus for creativity in our professional and personal lives. If distractions overtake our behavior, they can damage or block relationships that are necessary for psychological well-being and satisfactory work performance.

According to entrepreneur and blogger, Nir Eyal, the opposite of distraction is “traction.” As dis-traction moves us AWAY from what we really want, traction moves us TOWARD what we really want. Traction is something a person does with intent. Eyal posits that all human behavior is the result of internal and external triggers. External triggers can come from people, objects, and devices such as ding or ping from a cell phone. Internal triggers are cues from within such as feeling hungry or cold. Since all behaviors are responses to internal and external triggers or cues, distraction and traction come from the source.

Eyal recommends 4 steps to become indistractable: master internal triggers; make time for traction; hack back external triggers; and prevent distraction with pacts. If the root cause of all human behavior is to escape discomfort, as he argues, it follows that distraction is an unhealthy escape from bad feelings. While a person cannot CONTROL feelings, s/he can manage REACTIONS to feelings.

Studies have shown that resisting a desire or impulse can make the desire stronger. When someone finally gives in to the temptation, a bad habit can start. Dr. Jonathan Bricker of the Fred Hutchison Cancer Research Center in Seattle, advises his patients who want to master their triggers to effectuate behavioral change to identify the thought or feeling behind the urge, keep a distractions log that includes what the feeling was, when it occurred during the day, and what they were doing at the time, and note the thoughts and feelings that preceded the distraction.

Eyal’s second step is make time for traction.  Since values are the attributes of what a person wants to become, it is important to turn values into time. An example of this in the workplace might be the employee who determines to be a contributing member of a team through proper preparation and collaboration. In other words, distraction avoidance means daily thoughtful and purposeful planning of traction behaviors that define what is to be done and when in synch with the stakeholders (e.g., one’s peers, manager, family members, etc).

The third step is hack back external triggers. Not all external triggers are distractions. If a person uses a trigger as a reminder to do a planned activity, for instance, this is not a distraction. The right approach is to understand whether the trigger is serving you, or whether you are serving it. If the prompt leads to a distraction, eliminate it. Other practical suggestions include removing unused apps on your cell phone and moving some of the ones you like to your computer, rearranging the remaining apps to prevent visual clutter, and adjusting the notification settings on apps. Social media sites often are the greatest threat because they easily can become the source of endless triggers. New tools can eliminate newsfeeds on apps to reduce triggers. Another technique is to resolve not to engage with social media until more important traction tasks are complete.

Finally, Eyal notes that the ultimate antidote to impulsivity is forethought. He encourages people to make a “precommitment” to overcome distractions. Precommitments are “pacts” we make in advance of the temptations that we know might come to engage in other traction tasks or behaviors instead.