Recalling Names and Numbers: An Engineer’s Guide to Mind Maintenance

All of us probably have forgotten someone’s name shortly after we’ve been introduced. If you were attempting to make a good impression on that person, forgetting his/her name is a major faux pas. This article presents a holistic approach to brain health and mental stimulation by delving into a little science and psychology about the mind and memory loss, steps you can take to maintain a healthy brain, and techniques to retain and recall information.

Proposed by Hermann Ebbinghaus in 1885, the Forgetting Curve describes the decrease in ability of the brain to retain memory over time. Humans begin to lose memory of learned knowledge in a matter of days or weeks unless they review the knowledge time and again. According to Ebbinghaus, the level at which a person retains information is a function of memory strength and length of time since the learning experience. The Forgetting Curve is largely defined by this equation: Retention = e ^ - (Time/Strength of Memory).

Studies show that most people forget 90% of information within seven to 30 days after the learning took place. While repetition is one way to extend retention, the end results are minute. Even after reviewing the information each week, people still tend to forget it over time.

Another factor affecting long-term retention is the learner’s perception of quality and meaning of the represented information. The more relevant and meaningful connections a person can make with new information, the better he/she will retain it over time. So, if you learn something that is important to you, and you can connect it with things you already know, your memory retention will be very high. Conversely, if you learn something that isn’t important to you, and you do not connect it with anything you already know, you will have poor retention and require frequent repetition.

These drugs cause memory loss by depressing the flow of signals within the central nervous system, or slowing activity in key parts of the brain related to transferring events from short-term to long-term memory. Many drugs that make people feel less emotion do so by blocking serotonin, norepinephrine and epinephrine – but these three chemical “messengers” are important for storing events in the "memory bank."

Painkillers especially block neurotransmitters in the brain from receiving messages that the body is in pain. It is what makes the drug work, but unfortunately memory loss is the major side effect. Even medications to reduce cholesterol levels have an affect on the brain because cholesterol contains lipids that form connections between nerve cells, a critical component of learning and memory.

For a detailed list of the brand/generic names of the foregoing drugs, and possible alternatives (which, of course, you should discuss with your physician), see Dr. Armon Neel’s article.

Tobacco, excessive alcohol use, and illicit drugs also are associated with memory loss. Smoking reduces the amount of oxygen that gets to the brain. Smokers have a more difficult time associating names with faces than non-smokers. Nicotine can have a significant negative impact on cognitive abilities, especially with long-time smokers. In fact, nicotine directly affects neurotransmitters that facilitate learning, memory, and cognition; it’s even been linked to brain matter degeneration and cellular death, loss of cognition, and dementia.

Smoking also affects GABA, the neurotransmitter connected with anxiety and overall wellness. Research confirms that nicotine greatly increases anxious behavior for up to two hours after smoking. Studies show that this “smoker’s anxiety” is more prevalent in highly addicted smokers, smokers who imbibe when they are having a bad day, those with low self-esteem, and those who smoke to “wake up.”

Most people understand that alcohol can cause blurred vision and slower reaction times, but the effects on memory are much more serious. Short-term memory loss and blackouts are common among regular drinkers, including something called “retrospective memory loss,” which is the acknowledgement, retrieval, and retention of previous events and data. Binge drinking – consuming five or more standard drinks in a two-hour period – inhibits new memories and often causes drinkers to forget some or all of what happened during that time. Extremely heavy drinking can result in an alcohol-induced blackout with serious consequences like brain damage and alcohol poisoning. Many experts argue that men should limit their consumption to two alcoholic beverages and women to one beverage per day.

A new study in the Journal of Psychopharmacology concludes that ecstasy, cocaine and other recreational drugs cause memory slips and impairment of verbal and special cognition, especially with prospective memory tasks. Prospective memory tasks can be either time- or event-based and are a response to an external trigger event that signals the brain that it’s time to do something. Interestingly, the participants also reported memory lapses that confirmed the lab-based results leading researchers to conclude that the lapses were real rather than imagined. For more detail about the study and its effects on the brain and memory, take note of this summary.

A variety of things you can do to maintain a healthy brain health include:

Some of the leading experts in brain and memory research offer several suggestions to stimulate mental function, and the one resounding practice that these researches agree upon is meditation.

Meditation quiets the mind, improve its concentration and focus, and prepare it for thinking deeply. Meditation relieves stress, boosts creativity, refreshes mental power and attracts things that people want to think about. By slowing each of the five major categories of brain waves, meditation allows for a time gap between thoughts that allows for better consideration and choices.

To practice meditation, find a quiet place to sit down. With hands in the lap and eyes closed, follow your breathing by repeating, “Breathe in; breathe out,” in your mind. When breathing slows, your mind feels calm. Whenever distractions occur, slowly refocus on the breathing process. Experts suggest that beginners should try book-ending the day with five minutes of meditation in the mornings and five minutes in the evenings.

Meditation is easy to do, and easy not to do. Some people view it as too ethereal or associate with a religious practice. The truth is that meditation is based in science and can be secular and non-spiritual. It also has benefits beyond improving concentration and focus. Productive meditation, for example, is a technique for rapidly improving the ability to think deeply by forcing yourself to resist distractions, deeply focus and really, really concentrate.

Mindfulness is a type of active meditation whereby we pay attention to our thoughts and feelings without judging them – that is, without believing that there is a right or wrong way to think and feel at any given moment. Though its roots are in Buddhist Philosophy, secular mindfulness gained popularity, in part, through the work of Jon Kabat-Zinn and his Mindfulness-Based Stress Reduction Program at the University of Massachusetts in 1979. Thousands of studies have documented the physical and mental health benefits of mindfulness. For more information about mindfulness and this type of meditation, navigate to this video featuring Jon Kabat-Zinn.

Self-soothing is another degree of meditation that involves bilateral stimulation to “short-circuit” worry and stress. Bilateral therapy uses right/left eye movement, tactile stimulation, or sounds to repeatedly activate opposite sides of the brain, releasing emotional experiences that are “trapped” in the nervous system. This assists the neurophysiological system, the basis of the mind/body connection, to unblock and reconnect itself.

As indicated at the beginning of this article, the essence of learning is to make “mental connections.” There are many different ways people learn. The most prevalent learning styles are visual, auditory, and kinesthetic. If you can discover how you learn best, you will retain information easier and commit it to memory. For a description of each of these and to determine your own learning style, see Understanding Visual, Auditory, and Kinesthetic Learning Styles.

Now, let’s consider some ways to increase learning and retention through mental connections.

Facts can be easy to forget. Yet, one simple technique for remembering facts is to connect them to an emotion to illicit a visceral response, rather than merely repeating the information in your mind. This method requires less effort and can produce greater results.

To remember a name, say it three times in your head. There is something about saying something three times that helps people to remember. Advertisers on the radio often repeat a phone number three times for a reason ­­– because it works.

You can improve your cognitive processing by writing down key words or phrases as soon as you hear them. In doing so, the brain is forced to process the information, which allows you to internalize it on a deeper level.

Another trick for retrieving a memory is to visualize the scenario. Have you ever forgotten where you put your car keys? Try picturing where you were, who you were with, and the last place you saw them. Memory retrieval is much easier using pictures and association. Known as the layering effect, this technique allows us to store more data than a single retrieval system would allow. While we’re on the topic of association, you can improve name recall by thinking of of a person, place, thing or idea with a similar or same name as you have just learned (association). Then, visualize this new person side-by-side with that person, place, thing or idea.

One of the most effective ways to retain information is with mnemonics, which refers to any system or device designed to aid memory such as patterns of letters, ideas, or associations. One example is HOMES that triggers memory of the names of the Great Lakes. There are different types of mnemonics. Acronyms or expression mnemonics are similar to the HOMES example. Music mnemonics provide a structure for the information and stimulates retention. A catchy tune/lyrics draws attention and tends to stick in people’s heads. Similarly, rhyming mnemonics create a song-like patter that is easy to remember.

Invented by ancient Greeks and Romans, the memory palace mnemonic device is effective and enjoyable to use. With this technique, you associate or “peg” a location with which you are familiar with the things you are trying to remember. The technique works because you are associating things with strong past memories. Many professional athletes have used the memory palace effectively. Read more about how to create a memory palace in The Memory Game e-book.

Finally, you probably can learn more with chunking. The chunking technique involves grouping items, finding patterns in them, and then organizing the items. Examples might be grouping items on your grocery list by aisle or looking for connections between events in any historical period.

If you’re frustrated (and a bit embarrassed) when you haven’t been able to recall a name or a date, there is hope! A holistic approach to brain health can improve learning, stimulate mental function, and mitigate memory loss.

These are but a few of many learning, retention, and recall practices. For more, download the The Memory Game e-book. 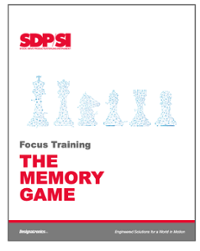