Improving the Quality of Work: Getting into Flow

Have you ever been so focused on an activity that you lost track of time? Yet, at other times have so many things competing for your attention that you lose brain power and productivity because of all the external distractions? Most of us experience both of these “states,” but usually feel personally satisfied when we have “put our mind” on the singular task of getting something done. Well, this article is here to help us learn how to “put our mind to the task” a little more frequently. We examine the concept of flow – that state of perfect concentration where our thoughts and emotions completely align to the task at hand without preoccupation, anxiety and other impediments to our work – its relationship to emotional intelligence, and how to achieve it.

Researchers describe flow as a unique state of concentration in which action seems effortless. It is a state where a person feels unselfconscious and wholly absorbed in the moment. The flow state exists when someone is performing at the peak of his or her skills, when positive emotions and energy and awareness and action become one.

Much of the current understanding of this concept comes from psychologist, Mihaly Csikszentmihalyi. Csikszentmihalyi was a prisoner during World War II and, from that experience and his observations of pain and suffering, he became curious about what makes people happy and content with life. In his studies, Csikszentmihalyi found that many people were unable to be content after the loss of a job, home or other forms of security. In his quest to answer the question, “What makes life worth living,” he found that happiness is not a rigid state of being that one cannot change. Rather, happiness is an internal state of being that takes committed effort to manifest.

His research found that people are the most creative, productive and happiest when they are in a “state of flow.” In his popular book, Flow: The Psychology of Optimal Experience, Csikszentmihalyi describes it as, “A state in which people are so involved in an activity that nothing else seems to matter; the experience is so enjoyable that people will continue to do it even at great cost, for the sheer sake of doing it.” It is the optimal state of intrinsic motivation.

His conclusions were largely based on interviews with athletes, musicians, and artists because he wanted to know when they experienced the most optimal performance levels. He also wanted to know what piques creativity in the workplace and how creativity relates to productivity.

The Relationship of Flow to Emotional Intelligence

Although the expression Emotional Intelligence (EI) first appeared in a paper by Michael Blodoch in 1964, it was author and scientist, Daniel Goleman that popularized the term in his 1995 book of the same title. EI describes people’s capacity to recognize emotions in themselves and others, discern between different feelings, and label them. Emotional Leadership uses such information to guide thinking and behavior and influence others. The Emotional Intelligence Quotient adjusts emotions as required by the situation or to achieve goals.

Goleman suggests five components to emotional intelligence. The first is self-awareness. This is the ability not only to recognize one’s own emotions, but to be aware of the effect of emotions, actions, and mood on other people. The second is self-regulation, the ability to regulate and manage one’s emotions. Self-regulation does not mean blocking emotions; rather it simply means waiting for the right time, place, and situation to express them. Third is social skills. In a professional setting, social skills include active listening, verbal communication skills, nonverbal communication skills, leadership, and persuasiveness. The fourth is empathy. Empathy is ability to understand how others are feeling and to recognize the emotional states of others. Empathy allows a person to understand the power dynamics that influence social dynamics, especially in the workplace. The last component is intrinsic motivation. People with a high Emotional Intelligence Quotient are motivated by things beyond external rewards like fame, money, recognition, and acclaim—they have a passion to fulfill their own inner needs and goals.

People with high EI experience flow because they are action-oriented, have a high need for achievement, constantly look for ways to do better (i.e., they pursue peak experiences), and are totally committed to/in tune with a task. Essentially, EI is flow at its best.

How to Achieve Flow and Why It’s Important

Many people are simply unproductive at work. Even when they have a to-do list, they end up achieving little or nothing by the end of the day. The primary cause of this, according to many psychologists, is unhappiness, dissatisfaction, and displeasure. In fact, a 2014 study by the Conference Board, a New York non-profit research group, found that 52.3% of Americans are unhappy at work in contrast with 61.1% of people who said they were satisfied at work 30 years ago.

Csikszentmihalyi explains this dissatisfaction through a conceptual model: 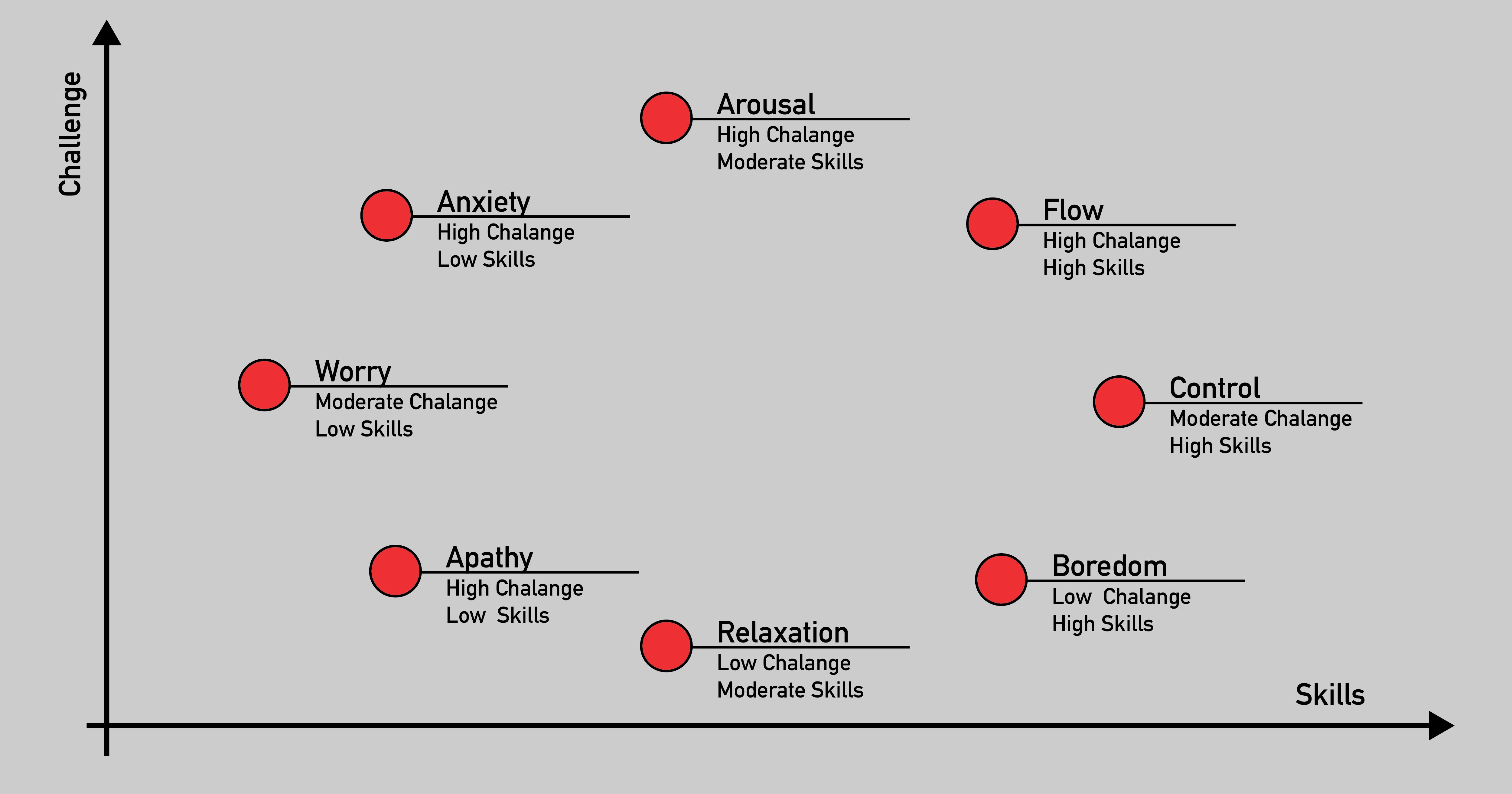 As the graph indicates, the balance of perceived challenges and skills is important. On the one hand, when a challenge is bigger than a person’s skill level, s/he becomes anxious and stressed. On the other hand, when the level of skill exceeds the size of the challenge, boredom and distraction tend to occur. Since the experience of flow is just in the middle, the balance is essential. Besides being happier and more productive, achieving flow helps a person be more focused, manage challenges more effectively, and complete tasks faster and more easily. Readers interested in Csikszentmihalyi’s TED talk can access it here.

While flow hasn’t been the subject of much neuropsychological investigation, some researchers suggest that flow is associated with decreased activity in the prefrontal cortex of the brain—the section responsible for higher cognitive functions such as self-reflective consciousness, memory, temporal integration, and working memory. While it might seem counter-intuitive to relate such decreased activity to the state of flow, the inhibition of the prefrontal lobe may enable the implicit mind to take over, resulting in more areas of the brain communicating freely to engage in creativity. The hypothesis is that flow is related to the brain’s dopamine reward circuitry when curiosity is highly amplified. So, how does someone go about achieving flow? Here are some tips.

Distractions disrupt the flow state. Make clear and conscious choices about how and what and when you watch and read according to your schedule. There needs to be “safe space” for uninterrupted thinking so that each moment gets the attention it deserves.

Video gaming is one of the quickest ways to induce flow. There’s even a game called Flow that pays homage to Csikszentmihalyi. The achievement of a state of flow is part of what makes playing video games so enjoyable. Studies show that playing video games may lead to improvements in areas of attention, cognitive control and workload, visuospatial skills and creativity. Even simple games like Angry Birds have shown to improve players’ moods, promote relaxation and ward off anxiety.

Use Imagery and Music to Boost Confidence and Flow

Psychologist Stefan Koehn conducted tests on the use of imagery to increase flow. His research found that when athletes recalled images of past performance while listening to their favorite music, it triggered an enhanced state of flow and their performance improved in following exercises. Thus, the study showed a positive correlation between imagery and confidence.

Research has shown that the flow experience is more enjoyable when done in teams. Remember that the desired state occurs when the skill level and challenge are in balance. By making flow a team activity, tasks that may be beyond one team member’s skill level, may not be for other team members.

Other Tips to Increase Concentration and Flow

Moving into a state of flow requires discipline to maintain sharp attention on a task. Once you achieve it, you’ll want to experience the blissful state again as you realize you are perfecting your skills, taking on greater challenges and, simply, just getting better at something. Flow to grow!